Developer:
The Elder Scrolls Renewal Project
(a volunteer team with members across the globe)

2019 trailer “Call of the East”:
https://www.youtube.com/watch?v=Qf8lMMpFIDU 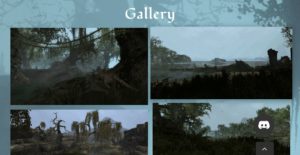 The Elder Scrolls Renewal (or TESRenewal) is an organized community of modders, artists, and developers, looking to rejuvenate the Elder Scrolls games by bringing them into newer engines.

Skywind is a community-driven fan project to recreate Morrowind (2001) as a “total conversion” mod for the much newer Skyrim: Special Edition (2016) engine, rejuvenating the game with modern graphics and gameplay, and with full voice acting. The team is determined to maintain very high standards of quality.

The project began in 2012 but underwent a total change of direction in 2015 to become a total ground-up recreation rather than a port of the older game.

The game will be for PC only. Players will need Skyrim: Special Edition and Morrowind with its expansions. There is no set release date at this time.

Skyblivion is a sister project under the same TESRenewal banner, recreating Oblivion (2006) in the Skyrim: Special Edition (2016) engine. The Skywind and Skyblivion teams are independent, but do collaborate.

Morroblivion is a completed sister project under the same TESRenewal banner, porting Morrowind (2001) to the Oblivion (2006) engine. It was first released in September 2010 and has since had hundreds of updates, the last released in 2014. A group of volunteers continue to work on patches and improvements.

The Elder Scrolls is a series of fantasy video games developed by Bethesda that have very traditional RPG rootsbut have come to be known for their extremely unique and deep content, subverting many of the Tolkien-esque tropes of conventional medieval fantasy.

Morrowind is a 2001 fantasy roleplaying video game set on the hostile island of Vvardenfell in the fictional continent of Tamriel, 200 years before the events of Skyrim. The player begins as a prisoner who is employed as a spy for the governing Imperial Empire, but finds him- or herself on the path of fulfilling prophecy against nefarious forces from a bygone era. The game was a bold last-ditch gamble by the studio to avoid bankruptcy, giving it unprecedented creative freedom, and it is often remembered as one of the most immersive RPGs ever created.

Skyrim is a hit 2011 fantasy roleplaying video game in the same series, set in the Viking-esque province of Skyrim 400 years later. The player discovers their godly gift of dragonblood (which grants the power to use their voice as a weapon) and goes on to become the ‘Dragonborn’. The 2016 Special Edition was released based on the improved engine used in Fallout 4, bringing significantly enhanced graphics, a 64-bit architecture, and greatly improved stability.